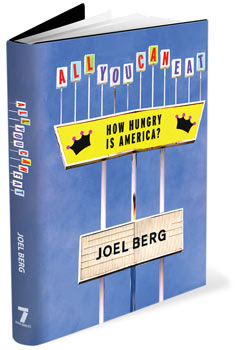 We would like to thank Joel Berg for speaking at Clayton Books on March 14 and at the Food Bank on March 16. Even if you missed the event, be sure to read the book. Below are Joel’s facts for California and his ideas for solving hunger in America.
THE FACTS: California
? According to the USDA, from 2005 to 2007, more than ten percent of California residents were hungry or at risk for hunger – and that was before the recent economic crisis. High food prices and skyrocketing unemployment have only made things worse, as millions of additional Americans have been forced to join the lines at soup kitchens and food pantries in California and across the country.
? In 2006, California ranked last in food stamp participation among the 50 states and the District of Columbia, according to a 2008 USDA report. (Note: The Federal Food Stamp Program was recently re-named the Supplemental Nutrition Assistance Program or SNAP.)
? At last tally, in 2007, 36.2 million Americans lived in homes that couldn’t afford enough food – including more than 12 million children.
? According to a Harvard study, hunger costs our country an estimated $90 billion per year in decreased worker productivity, impaired educational performance, and increased health care spending.
THE POSSIBLE SOLUTIONS
? Reform, streamline, yet increase the purchasing power of more than a dozen existing federal government nutrition programs, like food stamps and school meals.
? Provide universal, free school breakfasts in classrooms to all students, regardless of family income.
? Implement a national plan to increase living wage jobs and slash poverty.
? Give charities the resources they need to fill in the gaps after government has done its job.
To learn more, read the book and visit http://joelberg.net/.
This March, the Food Bank of Contra Costa and Solano is recognizing National Nutrition Month® in honor of the more than 36 million Americans that lack access, at all times, to enough food for an active, healthy life. National Nutrition Month® is an education and information campaign sponsored annually by the American Dietetic Association. Those at risk of hunger often cannot afford preventative and follow-up health care services. For this vulnerable population, access to nutritious foods is vital in maintaining good health. Studies show that growing children need a balance of vitamins and minerals for cognitive and behavioral development.The Food Bank is a reliable source of healthy foods for low-income families, delivering over 3.5 millions pounds of fresh produce annually. 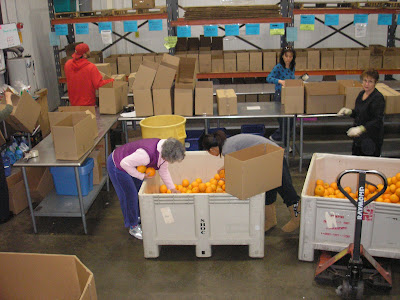 The volunteers pictured above are boxing produce for the Food Bank’s Farm 2 Kids program. through this program, kids in 40 schools in Contra Costa and Solano counties are able to take home 3-5 pound bags of produce every week during the school year.

We would not be able to continue this critical work and provide nutritious foods without the support of our community. Your food and fund donations are leading our efforts to creating a hunger-free community. Together, we can provide hope to hungry Americans for a better tomorrow.

To learn more about nutritious initiatives happening at the Food Bank, visit www.foodbankccs.org.

How much must an individual earn to support their family? According to http://www.livingwage.geog.psu.edu/ it would take more than three full-time jobs, earning minimum wage, to support a three person family in our community.

Last week as President Obama addressed the state of the economy, he acknowledged that many Americans are struggling with hunger and are turning to food banks for help. But as those people reach out, he noted, food banks across the country are often unable to keep up with demand. Watch the video from Feeding America to see what the President had to say.