From May 11th – June 15th, 2016 the Northern California Leadership Succession Program (LSP) sponsored a District-wide canned food drive and collected cash donations to benefit the Food Bank of Contra Costa and Solano. With the support of our projects and the District Office, the food drive gathered 1,473 cans of food and raised $2,412.44. Kiewit gave a matching donation of $1500.

On Thursday, June 16th, LSP members participated in the “Kiewit CAN Build” Competition where 3 teams competed by building structures made entirely out of canned food. The theme was “Engineering Marvels”. Money raised during the Food Drive was used to purchase supplemental canned goods for the competition. In less than 2 hours, each team created an amazing structure – the Hoover Dam and Bridge, the Eiffel Tower, and AT&T Park.

Each structure was judged in accordance with the competition specifications. A panel of juror’s awarded structures for the “Best Use of Labels”, for “Structural Ingenuity”, and as the “Jurors’ Favorite”. District Office staff had the opportunity to vote for the “People’s Choice” Award.

Special thanks to the Kiewit/Cherne staff, craft, clients, and partners who donated cash or cans, Safeway, Costco, and the “Kiewit CAN Build” Teams! Thank you also to crews from the Crystal Springs Bridge Project and Vallejo Yard for building and demobilizing platforms for the event. 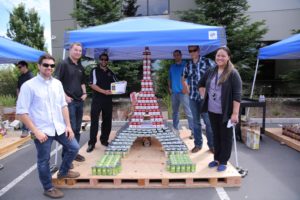